Every business needs a security system. Without one, intrusions, thefts, and property damage present constant threats. In addition, disasters, such as fires and floods, can spread undetected and endanger occupants. Paramount Security Solutions designs, installs, and maintains commercial alarm systems in Portland that neutralize hazards and protect your company’s assets and people.

Commercial Security Systems in Portland OR

Commercial alarm systems from Paramount Security Solutions offer the capabilities you need to sleep well at night. Whenever something goes amiss, whether created by a person, mechanical failure, or natural occurrence, the crisis is detected in mere seconds.

Intrusion detection systems capture perimeter violations. In addition, motion sensors inside the property trigger alarms, making it impossible for intruders to move throughout the premises undetected. For greater security, thermal scanning systems read changes in air temperature that indicate the presence of intruders.

Burglars entering in the dead of night are not the only concern. Business security systems must also protect against intruders bent on entering during business hours, whether to steal, damage property, or harm employees and visitors inside. When coupled with an access control system, alarms-sound, silent, and linked to security personnel-alert the company when a restricted area suffers a breach.

Fires, floods, and other emergencies endanger property and lives. Paramount Security Solutions’ alarm systems detect smoke, dangerous temperature increases, and property damage. With a security system from Paramount, the alarms sound long before an emergency has time to become a disaster.

Our alarm systems use automation to link to the central station, which provides 24/7 alarm monitoring. The moment an alarm is triggered, whether by an intrusion, smoke, or another occurrence, security personnel alert authorities. Alarms can be controlled at the main control panel and integrated with security cameras and video surveillance systems, they have visual access to what is occurring on the premises, allowing them to pass valuable information to first responders.

To create the most effective security apparatus, you need a partner with design and installation expertise to monitor and maintain the system.

Paramount Security Solutions’ team starts with a consultation, where our professionals assess the property’s vulnerabilities and recommend solutions based on your goals and budget.

Once you select a security system, our installation team places the components, ensuring they cover all the perimeter and access points. In addition, alarms for fire and carbon monoxide can be strategically placed throughout the facility. We also integrate alarm systems with other chosen security equipment, such as video surveillance and access control.

Post-installation, you can count on Paramount Security Solutions to conduct routine maintenance and provide 24/7/365 professional monitoring, so your facility is never left unprotected. 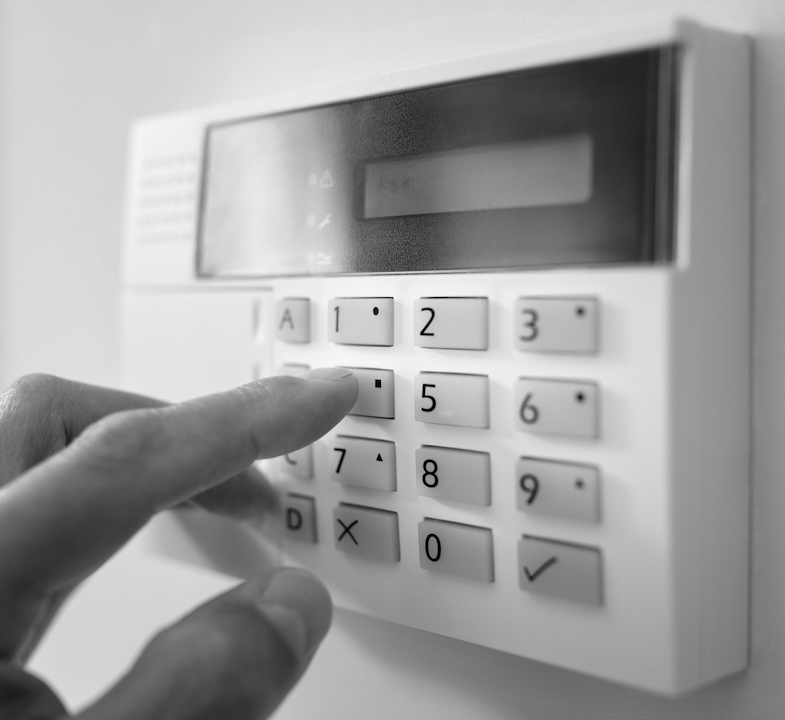 Types of Alarms for Commercial Properties

Commercial alarms can be categorized as fire or security systems. For example, Paramount Security Solutions offers security systems in Portland, Oregon, with premier options for both, stopping intruders in their tracks and detecting fires when they’re small.

A burglar alarm sounds whenever an unauthorized person breaches the property’s perimeter or attempts to circumvent access control points. In addition, motion detectors inside the premises provide extra protection. For example, if a burglar hid inside a store during business hours and came out to steal once the place was vacant, motion detectors would quickly register the activity, triggering an immediate response to the central station.

Paramount Security Solutions is much more than an alarm system company. We offer security solutions that create an impregnable barrier against intrusion and protect your building’s occupants from potential hazards, including fire, carbon monoxide, and flooding detections.

Alarms serve the vital function of notifying the central station, occupants, and management of imminent danger. The result is fast emergency responses and the ability of occupants to take steps to protect themselves.

Commercial security must always be top of mind for property and facility managers. Both business assets and people are in danger without protective measures. Paramount Security Solutions offers commercial alarm systems Portland that secure businesses with intrusion- and fire alarms that integrate with other key security measures.

When considering whether to add a security alarm system, consider the break-in statistics. Security alarm systems can deter burglaries and have an effect on whether or not they are successful. We will devise a custom plan to secure your entrances and windows so you are protected.

Malfunction in alarm systems are often undetected and costly. We can assess your current system or repair a low-performing system quickly. Our activity reports identify any potential communication issues to minimize downtimes or connectivity concerns.

We partner with an accredited alarm monitoring leader to offer 24/7 monitoring services and trusted peace of mind when you need it most. When a potential security breach is sensed, an alert is sent to the central monitoring facility for immediate action.

Paramount has gained my respect on multiple levels. Recently they installed a security system throughout our new business. At the time, we had some issues with bringing in the necessary coverage from our local provider and ended up having to switch companies in the middle of setting up. This situation could have proved to be a disaster, but Paramount was on top of it from day one. I was impressed with how they took the initiative to assist me in working with the provider so that things were handled correctly and that we were given the coverage that supported our security needs. During the process, they made sure that all issues were addressed and handled immediately.

Paramount made my job a lot easier and gave me peace of mind by responding promptly, and listening effectively. I observed them time and again going above and beyond to take care of their clients.

It is my pleasure to highly recommend Paramount. The quality of work they provide along with the level of Customer Service they deliver is first-rate. Paramount Security Solutions is superb!

Security Cameras and Access Control customer from Forest Grove, OR

Working with Paramount Security was effortless, trouble-free and uncomplicated. They were easy to work with, professional, clean and friendly. The cameras work great and we feel so much more secure in our house now. When we had questions, they were promptly and thoroughly answered! We highly recommend this company!

As a real estate broker and property manager, I work with a number of contractors on a daily basis. Paramount Security Solutions have outdone themselves through their efficiency, quality of work and ability to grasp the customer concept and engineer a custom solution to perfection. They are my new favorite low voltage contractor.

Low voltage electrical and data networking customer from Tualatin, OR

Working with Paramount was 5 Star Service from the first phone call! All team members were very professional and ‘gracious’. I’ve felt ’taken care of’ in the most gracious of customer service ways. I’m really pleased to have a trusted gate repair resource I can call and know that I will be okay.

Gate Service and Repair customer from West Linn, OR

Paramount’s concern and service to us here have been impeccable, companies that stick with it and put their customers first are a dying breed as I have seen over the years. It is refreshing to deal with a company that not only takes ownership in resolving a situation but does it with concern for the customer’s budget as well. That truly sets you and your company apart from others. Thank you both very much for going that extra mile to make our business run smoother and taking the best care.

How do I select the right Alarm System for my home/business?

Alarm systems are a critical component of your personal and business safety. Here are some of the questions…

Do I really need a security alarm system?

With crime rates increasing in metro cities, now is the time to decide if investing in a security system is the right decision for you.

Can purchasing a security alarm system, reduce our insurance premiums?

On average, installing monitored safety and security devices can reduce your insurance up to 20 percent. Most insurance companies understand that a professionally monitored security system adds an extra layer of protection and creates a safer environment.

Why should I choose professional monitoring?

What happens if there’s a false alarm?

Avoiding false alarms is important because 1) alarms are noisy and 2) false alarms sometimes lead to fines. Penalties for false alarms vary by locale. In some towns, the police and other emergency personnel charge hefty fines whenever they’re dispatched for a false alarm. In other towns, there’s never a charge or the fine might be waived for the first offense. A couple of measures help protect against unneeded emergency response. First, by law, an alarm company needs to give you 30 seconds to disable the alarm. (To bypass the 30-second rule, add a panic button!) Second, if an alarm is triggered, you’ll have the opportunity to tell the monitoring company that no service is needed.